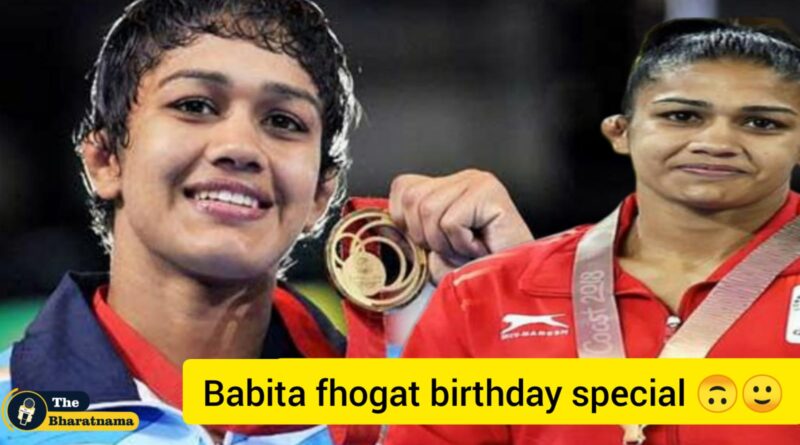 Babita Phogat is celebrating her 33rd birthday on 20 November. Babita Phogat was born on 20 November 1989 in a Hindu-Jat family in Balali, a small village in Bhiwani district of Haryana. She is the second daughter of Mahavir Singh Phogat. He has total 4 sisters Geeta (Geeta Phogat), Ritu, Sangeeta who are all international wrestlers. He also has a younger brother.

From the age of 6, Babita Phogat used to practice wrestling with her siblings in her village. Her father was also a famous wrestler of his time and he gave good training to all his daughters. Not only this, he also trained his brother’s daughter Vinesh and Priyanka.

He won silver and gold medals in Commonwealth Games 2010 and 2014 with his brilliant performance. Behind the success of Geeta-Babita Phogat, their father and Dronacharya awardee Mahavir Singh Phogat has a big hand. Both the sisters have achieved this position on the strength of their hard work and marriage. Today, on Babita Phogat’s birthday, we tell you her diet secret, which keeps her fit and healthy even at the age of 32.

During an interview, Babita Phogat told that she drinks ghee before every match. Milk-ghee and almonds are the secret of their glory. Along with this, regular exercise is also included in his routine. Babita starts Babita Phogat’s day with apple and fresh carrot and pomegranate juice. After a workout, she drinks a shake made of soaked almonds. Also, she eats dry fruits as snacks.

She definitely drinks at least one liter of milk a day. Along with eggs and chicken, pulses, curd, vegetables and bread form an important part of his diet.

Talking about Babita Phogat, she brought laurels not only to Balali but to the whole country. He won a silver medal at the 2010 Commonwealth Games and a gold medal in 55 kg freestyle wrestling for India at the 2014 Commonwealth Games. Apart from this, he won the bronze medal in the 2012 World Wrestling Championship.

She considers her father as her biggest mentor behind her success. She wakes up at 4 am every day to practice and after 3 hours of practice, she eats 250 grams of almonds every morning.

Talking about personal life, Babita Phogat met wrestler Vivek Suhag in 2014 at Sai Center in Sonipat. From here the love story of both started. Both also participated in the dance reality show Nach Baliye 9. Both were married on 1 December 2019 The most interesting thing about their marriage was that instead of 7 rounds, both of them gave the message of ‘Beti Bachao-Beti Padhao’ by taking 8 rounds. Currently, Babita Phogat is enjoying her motherhood away from wrestling. They also have a son named Yuvraj. Along with this, she is focusing on her political career.