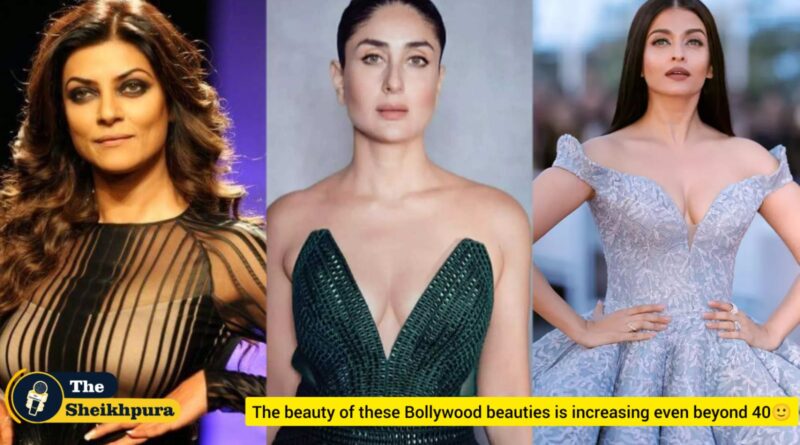 There are many Bollywood actresses who have crossed 40, but with their increasing age, their beauty is also increasing and in such a situation, they leave many young actresses behind. This list has names ranging from Kareena Kapoor to Sushmita Sen. This actress not only rules the hearts of people with her acting, apart from this she also makes people her own because of her beauty.These actresses look very beautiful even after 40 and people still believe in their beauty. In such a situation, it also gives competition to many young actresses. Know who else are included in this list, whose beauty is increasing even after 40.

Kareena Kapoor is 42 years old but due to her beauty, she still dominates among her fans.

Aishwarya Rai Bachchan has turned 48 today but her beauty has not faded even today. She won the title of Miss World in 1994, she is as beautiful as she was before.

Kajol always makes people crazy because of her piercing eyes. Kajol is 48 years old but people still like her flirtatious style.

Raveena Tandon is still seen defeating big actresses. The dominance of her beauty is visible everywhere. Despite being 48 years old, she still looks as gorgeous as before.

Actress Bipasha Basu is called Bengali beauty. Despite being 43 years old, she is very beautiful and recently she has also welcomed her daughter in this world.

Actress Kareena Kapoor has turned 48 today but she still injures people with her fitness and her eyes. People are crazy about her beauty even today.

Everyone is crazy about actress and model Malaika Arora. Even at the age of 49, she looks no less than anyone, nowadays she is in a lot of headlines regarding her personal life.

Shilpa Shetty is 46 years old but she has maintained her figure so well that no one is ready to believe that Shilpa Shetty has become 40 times.

The discussion of the beauty of Miss Universe Sushmita Sen is famous all over the world. The actress does workouts to maintain her beauty and figure.