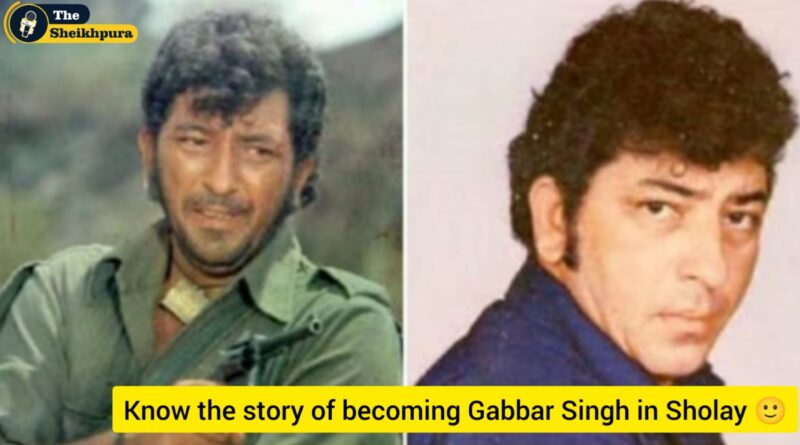 Although many roles and actors in Bollywood are known for their acting, but history will never forget the role of Gabbar Singh in the film Sholay. The role played by Amjad Khan in the film Sholay is still in the history of Bollywood. is registered. Amjad Khan, who became famous from house to house with his character, played this character with such intensity that people The image of his dacoit remains in the mind even today and every one of his dialogues remains a shadow on people’s mouth even today. Due to his strong voice and dialogue delivery, Gabbar Singh became famous in Hindi cinema by the name of dreaded dacoit and he is still at number one among villains.

Today we will tell you some interesting stories related to him which you may have never heard- Amjad Khan was born in Peshawar on November 12, 1940, but the popularity he gained by playing the role of Gabbar in the film Sholay is not known to anyone till date. But hardly anyone would know the story behind his powerful role. before this roll The actor was supposed to play Danny but he was busy shooting for his film Dharmatma, due to which he refused the role, after which Amjad Khan did the role. Amjad Khan name for Gabbar Singh was suggested by Salim Khan, father of Bollywood actor Salman Khan. Who knew that this suggestion of Salim Khan would immortalize Amjad Khan forever in the pages of history.

After being selected for the role of Gabbar Singh, getting into this role was the biggest challenge for Amjad Khan, people still remember the dialogues spoken by Amjad Khan in the film. People liked Amjad Khan style the most and the style he adopted in this film was not his own original style. Amjad Khan in the film The manner of talking was inspired by a washerman in his village. Actually, there lived a washerman in Amjad Khan village, who used to talk to people in this style every morning. Amjad Khan not only copied the style of the washerman but also listened to him carefully and was very much influenced by him.

Amjad Khan thought it better to copy this style of Dhobi and this decision of the actor brought him to a different position in Hindi cinema. During the shooting, when Amjad Khan started speaking dialogues in the style of Dhobi, the entire unit including the director of this film, Ramesh Sippy was shocked. In this way, this character of Sholay became immortal forever. The actor, who entered the industry as an artist in the 1991 film Nazneen, did many films in his career.

After making his Bollywood debut at the age of 17, he made his debut as a hero through the 1973 film Hindustan Ki Kasam. During his long film career, Amjad Khan also worked in films like Parvarish, Muqaddar Ka Sikandar, Lavaris, Hiralal- Pannalal, Seeta and Geeta. Due to a heart attack on 27 July 1992, this unique star of the film world went away forever. The actor said goodbye to the world at just 51 years of age.