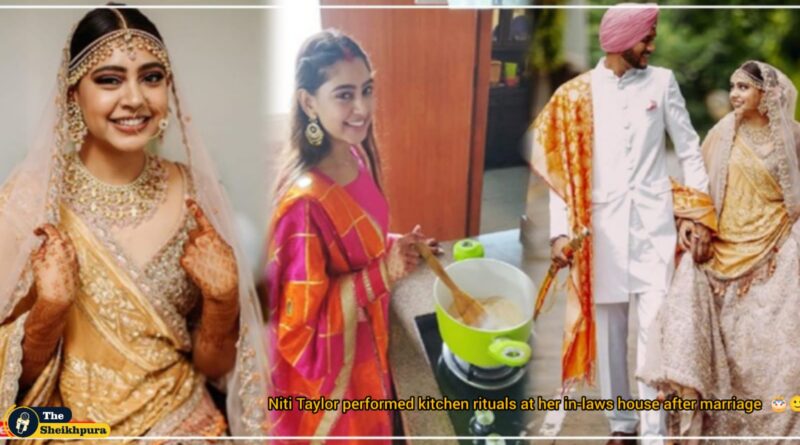 Niti Taylor is an Indian television actress. Niti Taylor celebrates her birthday on 8 November. Today the policy turns 28 years old. Niti Taylor married her boyfriend Parikshit during the Karona period. Niti Taylor could not do her marriage on a large scale due to not everything being right in Karona. Niti Taylor started her career with the serial “Pyaar Ka Bandhan” in 2009.

After this, she was also seen in serials like Gulaal and Bade Achhe Lagte Hain but Neeti got recognition after doing serial “Kai Hai Yaariyan” with Parth Samthaan. Whose policy became quite popular. Their pairing was very much liked in this show.

After this both were also seen in the show Aashiqui. After this, when the policy came in Jhalak Dikhhla Jaa, everyone was very appreciative for giving performance despite having fever and after that the policy became quite famous.

Niti Taylor married her school friend Parikshit Bawa on 13 August. Although Niti Taylor wanted a big fat Indian wedding, but due to Kovid, her wish remained unfulfilled. Despite wanting Niti Taylor, she could not fully enjoy her wedding because she wanted everything to be under control at such times. Niti Taylor had given information about her marriage to her fans through YouTube and Niti Taylor says that every moment of life should be enjoyed.

After marriage, Niti Taylor is seen enjoying her life a lot. Niti Taylor had made semolina pudding in her first kitchen. At this time this video of her became quite viral because at this time the policy was looking very beautiful too. She was wearing bangles in her hands, vermilion in demand and mangalsutra around her neck and she looked gorgeous in an orange suit. In the same kitchen, everyone was praising the policy with a smile.