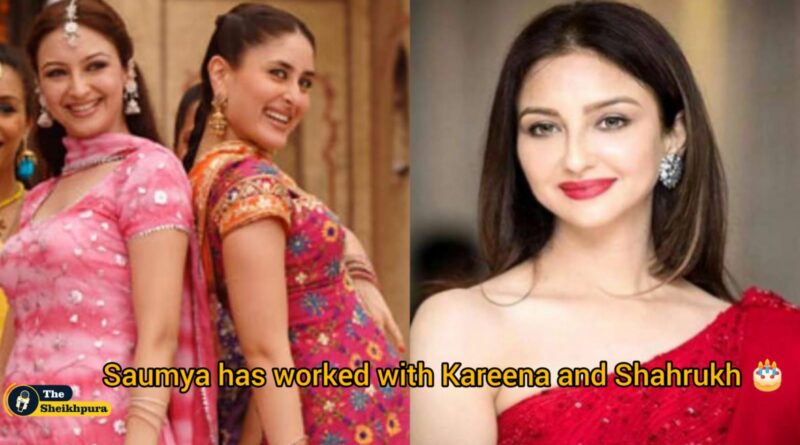 Saumya Tandon was born on 3 November 1984 in Bhopal, Madhya Pradesh, but completed her education from Ujjain. Saumya Tandon father was a professor at Ujjain University. Saumya Tandon started her career with modeling. She was the first runner up in Femina Cover Girl in 2006. Saumya Tandon also started acting in the year 2006. After this, he worked in the first film ‘Jab We Met’ in 2007. His character was also highly praised

TV’s ‘Gori Mam’ i.e. Saumya Tandon is celebrating her birthday today. Today is the 38th birthday of ‘Anita Bhabhi’. All the fans of Saumya Tandon are wishing her a lot on the special occasion of her birthday. Even after saying goodbye to the well-known TV show ‘Bhabiji Ghar Par Hain’, Saumya Tandon remains in the hearts of the fans. But do you know that there was a catfight between Saumya Tandon and Shilpa Shinde during the show, which the fans have not forgotten even today.

Bhabiji Ghar Par Hain’ fame Shilpa Shinde had said something about Saumya Tandon, on which the actress got very angry and gave a befitting reply to Shilpa. There was a lot of discussion about the fight between the two. But what was the reason, today we are going to tell you on Saumya Tandon birthday. Shilpa Shinde left TV’s most famous show ‘Bhabiji Ghar Par Hain’ at the peak of her career. He had given many reasons for leaving the show. According to reports, apart from cutting fees on the makers, Saumya Tandon had also made serious allegations of sexual harassment against the producer of the show, Sanjay Kohli. After leaving the show, Shilpa was constantly accusing the makers. Shilpa also dragged Saumya Tandon name in it.

But Saumya Tandon also did not remain silent. The actress responded to Shilpa Shinde’s allegations in her interview to HT. Saumya Tandon had said- It is very sad that Shilpa Shinde has used my name. Whatever he said about me is not true. I have a very professional relationship with him. I am the kind of person who is very confident about himself. It is very childish to say all these things. I don’t like such lies at all.

Saumya Tandon also said this about Shilpa Shinde– In an interview given to the media, she has said that she does not want to return to the show and then she said that she was asked to leave the show. How much confusion is there in me. Talking about Saumya Tandon, she has said goodbye to the show ‘Bhabiji Ghar Par Hain’, but she remains connected to her fans through social media. Shilpa Shinde is the most beautiful TV actress. Her beauty is also discussed a lot.