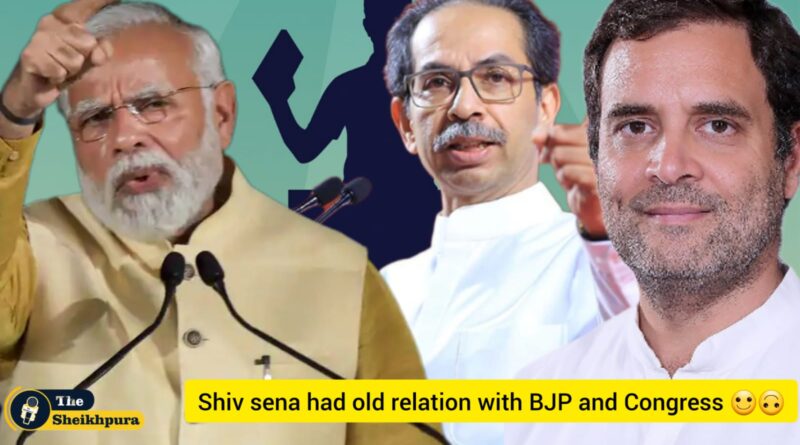 Shiv Sena has forged alliances with many political parties in its 56-year history. During this time it has been seen as the most popular ally with the BJP. This is the reason why Shiv Sena political career is being seen as a farewell after forging an alliance with Congress and NCP. In the beginning, Shiv Sena was a completely anti-communist party and in the 1967 Thane Municipal Corporation elections, winning 17 out of 40 seats, it stepped towards success in politics.

A year later, the Shiv Sena forged an alliance with the Praja Socialist Party (PSP). The alliance won 42 out of 121 seats in the municipal elections in Bombay (as Mumbai was then called). The PSP was formed in 1952 when the Socialist Party led by Jayaprakash Narayan merged with the Kisan Mazdoor Praja Party led by JB Kriplani. Given the ideology of the PSP and the fact that it would later split into several factions of the Janata Party, it was a surprising choice for the Shiv Sena.

This alliance of Shiv Sena and PSP did not last long and relations between the two parties soured in 1970 when the then PSP chief Madhu Dandawate criticized the Shiv Sena for its alleged role in the murder of a Communist Party of India MLA. Seeking allies in the 1973 Bombay civic elections, it joined hands with the Republican Party of India and this alliance won 39 seats.

Following allegations by #EknathShinde-led #ShivSena faction that the #UddhavThackeray-led camp had reportedly submitted fake affidavits before the EC to prove its strength, teams of the #Mumbai Crime Branch began investigations. | @ShoumojitB reportshttps://t.co/OUkhON3gkD

After this Shiv Sena supported Congress candidate Ram Rao Adik in the 1974 Lok Sabha by-election for the Central Mumbai seat. While Adik lost to CPI candidate Roja Deshpande, it did not affect the understanding between Shiv Sena and Congress. After this, in 1977, Bal Thackeray supported the candidature of Congress candidate Murli Deora for the mayoral election in Brihanmumbai Municipal Corporation (BMC).

This alliance of Shiv Sena and Congress continued in the 1980 assembly elections as well. Simultaneously the Shiv Sena campaigned for the Congress without fielding its own candidate and was rewarded with three nominations to the Maharashtra Legislative Council. This relationship eventually broke down permanently in the backdrop of the 1982–83 Mumbai-wide textile mill workers’ strike. The Shiv Sena is conscious of the fact that the Congress handling of the strike could lead to protests against its base in central Mumbai. Because of this Shiv Sena decided to end the alliance with Congress.

Meanwhile, in 1980, the Jana Sangh had formed a new party in the form of the BJP and by then the Shiv Sena had started coming closer to the BJP. In the 1984 Lok Sabha elections, the Shiv Sena had an alliance with the BJP on two Lok Sabha seats and lost both the seats. In the elections held after the assassination of Indira Gandhi, the BJP got only two seats in the entire country. A year later, in 1985, Shiv Sena contested the Maharashtra Assembly elections alone without any alliance.This time to Shiv Sena which was under the control of Sharad Pawar from outside. In this assembly election, only one Shiv Sena candidate Chhagan Bhujbal won.

But Shiv Sena took the lead in the BMC elections in the same year alone and proved that it has become a major force in Mumbai alone. Shiv Sena had won 74 out of 139 seats in the BMC elections this year. Subsequently, in the wake of the Ram Mandir movement of the Bharatiya Janata Party in 1989, Hindutva found a new ally as a political ideology,

With which Shiv Sena formed an alliance in both the Lok Sabha and Vidhan Sabha elections. The alliance with BJP proved to be a turning point for Shiv Sena politics. Soon after, the Shiv Sena was accused of masterminding the Hindu-Muslim riots in the aftermath of the 1992–93 demolition of the Babri Masjid and the violence that followed the Mumbai serial bombings.

After the death of Bal Thackeray in 2012, the Shiv Sena itself weakened. On 29 September 2014, the then BJP leader Eknath Khadse called Uddhav Thackeray and threatened that the BJP would fight the next assembly election alone. After the assembly elections, both the parties joined hands again but their relationship was never the same again.

In the days following the results of the 2019 Maharashtra Assembly elections, disagreements over power-sharing led the Shiv Sena to split from the BJP camp and the Shiv Sena forged an alliance with the Congress-NCP and has remained there ever since. Since then, the Shiv Sena has seen a serious split, which was created by the BJP. Shiv Sena had also lost power. Now Shiv Sena will contest the Andheri by-election with its new allies for the first time.